From cottage industry to being the fourth largest exporter in the world, Australian wine has grown from strength to strength. But in 2010 the industry faces a myriad of problems. Will Australian wine flourish or will we once again be a nation of plonk swillers? 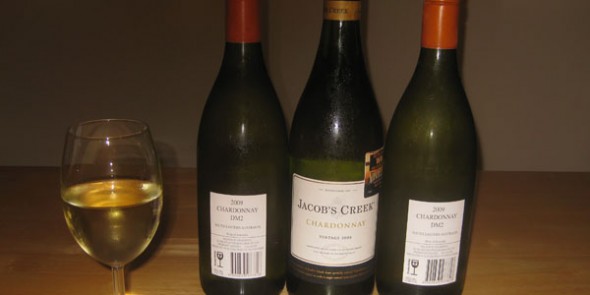 From cottage industry to being the fourth largest exporter in the world, Australian wine has grown from strength to strength.  But in 2010 the industry faces a myriad of problems.  Will Australian wine flourish or will we once again be a nation of plonk swillers?

The average Australian consumes 22.5 litres of wine per year with the Department of Foreign Affairs and Trade stating that “wine is very much a part of Australian life, closely associated with both business and leisure. Wine consumption is often linked to the country’s outdoor-oriented lifestyle as well as to the cosmopolitan, urban way of life of the bulk of the Australian population”.

In recent years, the explosive growth of the Australian wine industry has led to a massive oversupply of 22 per cent in 2010. Small growers are now facing the prospect of earning less than half of their production costs per tonne.

The over production of grapes has also led to the increase in sales of cleanskin wines, meaning cheap wines for consumers but a reduction in brand recognition for producers. The brandless wines are also of mixed quality, detracting further from the Australian wine brand.

The advent of grocery giants Coles and Woolworths onto the wine scene has also severely affected wine competition and Choice predicts that by 2015 the liquor industry may be “totally absorbed by the supermarkets”.

Spokesperson for Choice Christopher Zinn said that “smaller local bottle shops are subject to incredible price competition by the big guns such as Woolworths and Coles”. The introduction of the the corporation’s private label wines has hurt small producers who are now in competition with their customers.

As the fourth largest exporter of wine, Australia’s fastest growing market is China with exports growing by 46 per cent over the last 12 months. The emergence of China as a wine consumer however, has led to notable Australian brands including Penfold’s being imitated as “Benfolds”. The copies are threatening the burgeoning reputation of Australian wines overseas.

However, the real winners in the Australian wine industry are the consumers. Prices are at an all time low whilst quality is reaching heights not yet seen and ordinary Australians are more educated about wine than ever.

Tough times are being experienced by the Australian wine industry.

There is growing concern that Australia’s two main supermarket groups, Woolworths and Coles Myer, have established a duopoly in liquor retail.

Government restrictions on the number of liquor sales licences issued mean that both groups can only significantly expand by taking over existing liquor chain licences.

As a result, Woolworths now owns over 500 liquor stores, including the Dan Murphy’s chains. Coles Myer owns a similar number, including First Choice. Together, they control approximately 45 per cent of the retail liquor market.

Leanne Wells, president of the South Burnett Wine Industry Association, said both groups often significantly undercut their wine prices, which has made it difficult for independent retailers to compete.

“It’s almost a gut feeling that we know we are losing some market share to those cheap wines, which is disappointing.

“If they perceive bargains, humans are likely to go for it.”

Another key area of concern for the industry is an oversupply of wine.

According to the Australian Bureau of Agricultural and Resource Economics, Australia has a wine surplus of more than 1.8 billion litres.

It is predicted that this surplus will continue at approximately 1.2 billion litres for at least the next five years. This oversupply has had an adverse affect on the wine industry.

Ellen Rodgers, national brand manager for Yalumba Wines, said the large surplus of wine has caused financial hardship for many growers and has devalued the Australian brand.

“There is a big oversupply which means you will see a lot of cleanskins, and a lot of growers are growing bankrupt because their brands aren’t being sold to the wineries.

“When you have a supply not meeting demand, prices will drop and so will the brands.”

Ms Rodgers warned that growers must review their vineyard operations in order to address the oversupply.

“Growers need to start focusing on quality, not quantity, to keep the industry respected and to make sure that the wine is not discounted.”

Ordinary drinkers are the biggest winners in the Australian wine glut with premium wines available for more than half the price experts say.

“We’re spoilt for choice,” says Belle Reid, chief sommelier at Brisbane’s Bar Barossa. “People think that in order to get a great wine they need to spend more money than they have to, which is not true.”

Industry estimates have indicated that there is a 20 to 25 per cent oversupply of grapes on the market. The price of grapes dropped by 30 per cent in 2009 and estimates suggest by about the same amount this year.

“It’s hard for us to see our suppliers struggle,” said Ms Reid. “The glut is really hurting the industry.”

Recent reports state that growers are being paid as little as $200 a tonne, less than half the cost of production. In addition to the 20 per cent surplus of fruit bearing vines, a further 95 million cases of wine sit unsold.

“The wine industry has certainly stopped planting and there has been a consolidation process of existing vines over the last five years,” said Paula Tewksbury, a wine promoter and educator from Brisbane. “Eventually that will have an effect and our production will meet what our market is.”

However, Ms Reid believes that the glut will increase wine education in the long term.

“There’s almost an overload of information to consumers. There are so many Australian wine makers making amazing wine for $10 a bottle.”

Ms Reid added that the discounting of wines by grocery giants Coles and Woolworths was a plus for consumers. “The idea is to get more people drinking more wine. The only people that have won from this are the consumers.

“Ultimately in the long-term, customers know the truth about this and it will mean prices will go up, but right now drinkers are enjoying really smart business,” said Ms Reid.

The growth of the Queensland wine industry has seen regional wineries stake out a share in the Australian export market reportedly ranked as the nations fourth largest export commodity.

According to the Australian Wine and Brandy Corporation (AWBC) in the year ended September 2010, the quantity of wine exports increased by two per cent to 772 million litres valued at $2.10 billion as international demands for Australian wines continue to soar.

Appealing export figures has fuelled the Queensland wine industry growth, which has dramatically escalated in the last decade now covering an estimated 1500 hectares.

Queensland’s tropical fruits are being used by many wineries in the region to make distinctive tasting wines spawning new varieties that are receiving widespread international acclaim.

Boutique Bottle Shop owner, Michael Martin said, “we are seeing more and more quality wines coming from Queensland wineries, however this regions wines only make up a small percentage of the overall Australian export wine industry, however at the current rate of growth we may soon see Queensland wines assuming a more dominant position on the international stage”.

Below are two videos discussing the state of the Queensland wine industry from an independent winery perspective and a Boutique Bottle shop viewpoint.

Watch the Video of the interview with Sirromet Winery Tour Manager.

Queensland wineries are reaping the fruits of its investment in Wine Tourism in order to offset the downpour caused by the wine glut.

Independent Queensland wineries are honing in on this niche market seeing tourism dollars as an alternative source of income which is expected to be an industry worth $1.1 billion annually by 2025 according to the Australian Wine Foundation.

Wine Industry development officer, Ross Bearkley said, “Queensland is famously renowned both domestically and internationally for its tourist image of beach culture and theme park attractions, however under the action plan the government is making a concerted effort to broaden this image to include wine tourism.”

According to the Winemakers Federation of Australia, wine tourism has the potential to increase awareness of and desire for Queensland wines among both domestic and international travellers.

“Wine tourism does not only benefit the wineries but has the potential to provide positive flow-on advantages for wine regions and the state in general as all businesses that are involved in the wine, tourism and associated industries will experience economic gains from this industry,” said Mr Bearkley.

The Granite Belt, Queensland’s premier wine tourism destination has harnessed this market which has not only benefited the wineries but has promoted their region’s distinct and unique culture through offering wine tour holiday packages that support local businesses and employment.

Tourism Queensland research department reports that wine tourism has provided a new means for independent wineries to gain recognition and brand awareness that has helped them survive the wine glut.