First impressions of Mumbai: When the tourists become the tourist attraction

A lot of things in Mumbai are confronting: the humidity, the smells, the traffic, the people.

But undeniably, one of the biggest dilemmas that I face, and especially as an aspiring journalist, is how to capture these things that I find so bizarre and confronting without being disrespectful to the people of this city who are just trying to go about their days.

I have to constantly remind myself that these things that are oddities to me are just everyday parts of the life for the people of Mumbai, and that it could be confronting to have a foreigner staring, asking questions or taking photos. However, I now feel that I can empathise with this situation a little more, as today the roles were somewhat reversed.

Firstly, a couple of us were approached by a young woman in a washroom who asked where we were from, and then took out her her gestured for us to take a photo with her. It was something that we found to be quite strange, but also funny and harmless.

Then later in the day, as we were sightseeing at the Gateway of India, we found that many many more eyes were on us. To the locals, finding a large group of Westerners wondering around is quite an exciting occurrence. We were politely asked to take photos with person after person. There was even an entire family that were visiting Mumbai who posed for a photo with a couple of us. People took photos of us as we walked around, and some posed in front of us and had friends take their photo. What started as something quite harmless and funny became uncomfortable, when a large crowd of men gathered around us as we posed for a group photo. All of them were staring, and most had their phones out to take photos of us without asking for permission or saying hello. As they started to surround us, the mood amongst the group shifted. Suddenly we felt threatened and vulnerable as we looked up at the sea of curious eyes staring back at us.

Now that I’ve had a chance to reflect, I’ve realised that the intentions of these people who crowded around us were probably perfectly innocent. In the same way that my intentions were perfectly innocent as I stared at a woman balancing flowers on her head as she walked through the street or a group of young men making intricate wreathes out of multi-coloured flowers. 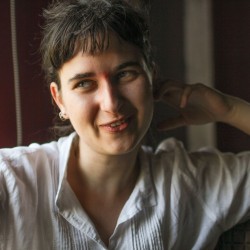 Sarah is a Journalism/Arts student at the University of Queensland, with a major in French and minors in Gender Studies and Writing. As well as a passion for storytelling, her particular journalistic interests are women's issues and other issues of social justice.