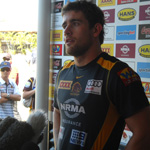 Brisbane are preparing for an on-field backlash from NRL heavyweights Manly after the Brookvale club was fined $50,000 through the week and had a host of key players suspended. The Brisbane Broncos go through their paces ahead of their blockbuster clash with the Manly Sea Eagles this weekend.

Brisbane are preparing for an on-field backlash from NRL heavyweights Manly after the Brookvale club was fined $50,000 through the week and had a number of key players suspended.

The third-placed Broncos host the second-placed Sea Eagles on Sunday at Suncorp Stadium in their final game of the regular-season, and while there is minimal chance of a change in ladder positions, both have the motivation to ensure the contest lives up to its match-of-the-round billing.

But despite Manly’s roster depletion, Brisbane are expecting to meet a determined and unified challenger, looking to recapture the league’s attention for the right reasons.

Young Broncos hooker, Andrew McCullough said his side was keeping an internal focus, but were prepared for the fallout from a powerful Sea Eagles outfit that will be eager to vent their frustrations on field.

“Manly are tough no matter when you play them, so whatever happens, happens – they’re going to field a strong team and the NRL can worry about the rest of it,” he said.

“[Manly’s trouble] is out of our hands and we’re just going to worry about ourselves out there.

“They’ve been playing great football for a fair few weeks and that’s why they’re second in the comp and we expect nothing different from them.”

The Broncos, currently riding a five-game winning-streak, have added incentives of their own, with the Sunday afternoon match being marketed as a regular-season farewell for inspirational skipper Darren Lockyer.

McCullough said the entire side would be playing for their champion five-eighth, who will retire at the end of the season as the NRL’s most capped player.

“He deserves all the accolades that he gets; he’s been a fantastic servant for the game,” said McCullough.

“He’s a wonderful, humble guy… the way to thank him for that is to perform each week.

“It’s an honour and blokes aren’t taking it for granted; we’re soaking up however long we’ve got left with him in the comp.”