Can You Catch A Cancer? THERE has been a dramatic increase of young, non-smoking adults affected by head and neck cancers due to a common sexually transmitted disease (STD), say health experts.

Researchers say that up to 72 per cent of head and neck cancer cases in Australia are now linked to the STD the Human Papillomavirus (HPV).

The spike in young, non-smoking adults developing HPV-associated head and neck cancers has been specifically connected to oral sex.

Developer of the Gardasil vaccine Professor Ian Frazer said that head and neck cancers due to HPV are on the rise and will continue to increase unless there is a push for population wide vaccinations.

“HPV-associated cancers are one of the most common in the world and the burden of these cancers is 5 per cent of all cancers globally,” said Prof Frazer.

“No one wants to get a virus they don’t need to have, and those who haven’t been vaccinated will be the source of infection in the future.

“The real problem is that in 20 to 30 years time we’ll want to eradicate HPV and those who are not vaccinated will slow that process down,” he said.

Epidemiologist for the Cancer Council Queensland Professor Joanne Aitken said that as the sensitive issue comes under focus, those without the vaccine could be left behind.

“Seventy per cent is not enough as there has to be a population wide vaccination not only of girls but of boys for the vaccine to be a success,” said Prof Aitken.

“I think it’s unfortunate that not all those who could be vaccinated are being vaccinated because of ignorance and a lack of awareness.”

“Quite possibly having been vaccinated for HPV will be seen as a very positive thing in a partner in the future,” she said. HPV 2

It is estimated that 14 million people globally will contract HPV through sexual contact each year.

Professor Suzanne Chambers Psycho-Oncologist and Professor of Preventative Health said the social judgments made on HPV-associated head and neck cancers is damaging to its patients.

“Cancer that is attached to a sexually transmitted disease is considered a ‘dirty’ thing,” said Prof Chambers.

“Feeling stigmatised about your cancer can be internalised as feelings of shame and discrimination.

“The effects of that are that patients feel socially constrained and don’t speak to their family or friends about their cancer, stopping them from getting a much needed source of support,” she said. Prof Chambers said it is a particularly stigmatising disease because most of its patients are under 35 years of age and must undergo rigorous treatments.

“Treatments for head and neck cancer are what we call morbid- they have lots of side effects,” said Prof Chambers.

“So as well as feeling stigmatised by the disease itself, the treatment is unpleasant that shows physical symptoms that people recoil from or find difficult to be around.

“The fact that this cancer is happening to young, healthy people is what underpins a lot of the psychological reaction; a young person getting cancer is unexpected, and is out of sync for their peers.

“Because this cancer is definitive and a sufferer can ultimately be handed a reason for their cancer, it can cause marital friction and feelings of anger and guilt,” she said.

HPV as a cause of head and neck cancer has only been recognized within the last five years and has come under surprising focus this year after actor, Michael Douglas said that his throat cancer had been caused by HPV contracted through oral sex.

HPV 3President of the Clinical Oncology Society of Australia, Professor Sandro Porceddu said that while the disease gains notoriety in the public eye, they’re unsure of why HPV has increased by 225 per cent in fewer than 20 years.

“HPV has been around for a long time, and we don’t know yet why there has been this rapid increase in the proportion of HPV-positive throat cancers,” said Professor Porceddu.

“What we do now know is that throat cancers caused by HPV affect both males and females so I do welcome the governments support of the program that now runs the vaccination of school age boys.

“Now we’re able to protect the boys from throat cancer which is great because HPV-associated throat cancers are more common in men than in females, the ratio being 3 to 1,” he said.

Professor Porceddu said some of the greatest social hurdles these patients must face are feelings of anger or guilt, and potentially marital friction.

“HPV associated throat cancers can, and do cause issues around relationships,” said Prof Porceddu.

“A question people ask is: does this mean my partner has been running around catching sexually transmitted diseases behind my back? “Say you’ve been married for 15 years and in those 15 years you’ve been completely faithful and then you develop a HPV-associated throat cancer, it doesn’t mean that you’ve been unfaithful, you may have acquired the virus long before you met your life partner,” he said.

While there is a 65 per cent survival rate, the radio and chemotherapy treatment for HPV-associated head and neck cancers is rigorous and can leave patients with side effects for up to five years.

Advanced Oncology Speech Therapist, Dr Bena Cartmill said that while they are improving the treatment regime, the most important part of recovery is having a strong social support system.

“There are new radiotherapy techniques where they can target the therapy to the tumour, which really defines the dosage down,” Dr Cartmill said.

“In saying that, the people who recover the best are those supported by someone at home, be that a wife, a daughter, a neighbour, just someone close by to help them.

‘I think the biggest change in this population is that historically this cancer was treated surgically, whereas if you’re receiving chemo-radiation, all recovery is done on an outpatient basis.

“So really it’s up to you and your family to manage all the side effects,” she said. 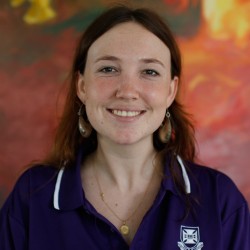 Milly is in her third year of journalism and arts majoring in sociology and German. She is particularly interested in international politics and health journalism.