India has such a rich and vibrant culture. The colour, the clothes, the flowers, the sounds and smells are all extremely captivating.

But Mumbai manages to make a stark social contrast with itself; where there is beauty, there is also poverty. This was not new information. Not new to me, as India has been a topic of research for three months. I was aware of various social issues in Mumbai. I had seen countless videos and images of Mumbai, but seeing it firsthand was something that research could not have prepared me for.

Travelling to a foreign country can be one of the most exciting things to do in life. To experience a culture vastly different from your own can change how you view the world and yourself. However, this excitement can be met with the feeling of loneliness and dread. This phenomenon is called culture shock. Culture shock can affect anyone and it can happen at any time while travelling. Traditionally, culture shock can take months before an individual is affected while travelling. However, my encounter with culture shock breaks the traditional norms, as I managed to experience it all within two days.

As a rule, the honeymoon phase is the first stage. New countries and cultures are seen in a romantic light. I experienced this during the research stage of the trip. I was fascinated by Indian culture, and I had been counting down the days until I arrival. I spent my down time watching various documentaries on new trends, music, and even the slums. And despite the confronting imagery, I felt I was prepared to take on Mumbai.

The frustration phase is usually the most difficult for travellers. This is the point where weariness of not understanding the language or social norms sets in. For me, this was my first few hours in Mumbai. Driving through Mumbai can only be described as organised chaos. The road rules I had become some accustomed to in my own country seemed more like guidelines here. The sound of a honking horn in Australia is most commonly associated with aggression. However in India it is used as communicative tool to let drivers know they are approaching. The drivers have an ability to seamlessly navigate the traffic and problem-solve in tight situations. I was stunned as everything I had known (at least regarding road rules) had been turned on its head.

The poverty stricken areas had also struck a chord with me. These areas were of no surprise to me, as I had done my research, but seeing it first hand was truly something different. Various buildings were near collapsed, and the ones that stood high had seen better days. There was also a stretch of shanty houses that relied on various materials to provide the inhabitants shelter. There were also a large number wild cats and dogs roaming the streets in search of nourishment. But what made this experience real was seeing how people lived in these conditions.

Generally speaking, acceptance comes after weeks or months of dealing with the above stages. Acceptance doesn’t necessarily mean that one completely understands their new surroundings. It can signify that an individual understands that they do not need fully comprehend another way of life in order to function. This stage is reached after the traveller has built a network that makes them feel comfortable. I am extremely luck in this instance, as I had already built a network through my fellow UQ students and various sources in Mumbai. But what made me feel most at ease was the hospitable nature of the locals. Shop owners, retail workers, and locals in the street where more than welcoming. Everywhere I went I saw smiles – even in areas rife with poverty.

The people I talked to where genuinely interested about where I was from and were more than happy to have a yarn and trade back-stories. I actually felt more welcome in Mumbai than I have in various parts of Australia.

Culture shock is a very real thing. I had gone from scared, to anxious, to comfortable – all within a matter of hours. No matter what perceptions I had, there was no substitute to experiencing it all firsthand. I have a new found respect for India and Mumbai, purely for the way they treat others. This account is only a brief snapshot of my time thus far, and I have no doubt I will experience these emotions over and over again in the coming days. 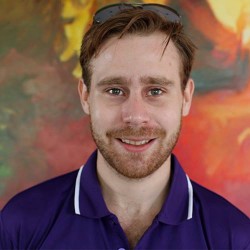 Tom Higgins is an aspiring writer, journalist, and communications professional. Currently Tom is a student at the University of Queensland where he studies journalism and communications. When he isn't at university, he can be found at Brisbane's community radio station, 4ZZZ. Tom's passion is centred around story telling, be it written, visual or audio. Tom's interests are somewhat diverse, ranging from arts and entertainment, the great outdoors, and social issues.