Depok is a vibrant and bustling city, located just on the southern border of Jakarta, yet in the past this has attracted some undesirable attention.

In 2016, the lively city experienced an active rise in incidences of street crime.

Putri Aulia Fardine, a Universitas Indonesia student, explained that Depok used to be host to vandalism, harassment, and worst of all, robberies.

“Begal crime was a big issue in Depok in late 2016. It is when two people on a motorcycle ride up to another vehicle and then rob the driver and passengers of everything they have. Then they ride off,” Ms. Fardine said. “It even happened to my aunt one day when she was on her way to work. They took her laptop, phone and money, and she never got any of it back.”

Thus, Depok, to some, has earned an unfavourable reputation as unsafe and disorderly.

However, Depok Police Chief Herry Kurniawan hopes to change this perception with the launch of Halo Polisi. Halo Polisi is a smartphone application that works like a panic button.

When pressed, it immediately connects you to the police, allowing you to request help or report a crime.

It is free to download but is currently only available on Android devices.

The application intends to create a forum between the police and the community, deter street crime, and give citizens a sense of safety. Polisi pulling over a family on motorcycle in Depok city.

However, it has received mixed reviews from the public so far.

Sugito, a security guard from Depok Mall, believes that there is seldom crime in Depok.

“I work in security, but I think Depok is a safe city. I have not heard of Halo Polisi before, but I don’t think it’s useful when crime is this low,” Mr. Sugito said.

Krisnanto, a Grab Bike driver, also agrees that Depok is a safe city, but believes Halo Polisi is a good idea.

“I have not personally experienced crime, but I have heard of this app before. I think I would use it for my own safety,” Mr. Kisnanto explained.

On the other hand, Ajeng Septimwulandari, a business woman, is grateful for a security application but does not believe it will have long term success.

“As a woman in Depok, I am always concerned about street crime. I really like the idea of the app, and would personally use it if I had to,” Mrs. Septimwulandari said.

“But before today, I had never heard of it. Unfortunately, I don’t think it will be popular in Depok because people do not know about it. The police did not do well socialising and advertising it to the public.”

According to Google Play, Halo Polisi has been downloaded by more than 3,000 citizens since its launch in February 2017.

In the long term, the Depok police hope this application can be utilised as a model to help develop panic button applications for other Indonesian cities experiencing high crime rates. 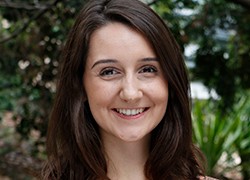 Ebony Harris is a member of the UQ Indonesia 2017 team. She is currently in her final year of a Bachelor of Journalism and Arts degree, majoring in International Relations.