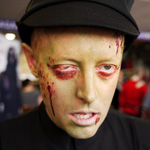 Filmmaker and puppeteer game for zombies When Mark Wee first became obsessed with zombies a decade ago, he never once expected to turn his dreams into reality.

Tapping into his skills as a film production specialist, Mr Wee is currently in midst of producing End Game, a independent Brisbane zombie film featuring two women who survive a zombie apocalypse and battle through infested streets in search of help.

“Brisbane has plenty of talented actors, make-up artists, costume makers, there is no way that we are lacking in creativity,” Mr Wee said.

“The crew and cast are in it solely due to their passion, and it is thanks to their enthusiasm and support that this film is able to materialise.”

Mr Craddock, a puppeteer whose work has been included in galleries as far as Pakistan and China, believes that the working dynamic in the team is the root for its success.

“We all know the stereotype of the overbearing director, but Mark tends to be very accommodating, in fact, too accommodating at times and always tries out suggestions from the team when directing a shoot,” he said.

“Previous independent films that I’ve been involved in have fallen flat on their faces because there isn’t enough of a driving force behind it, but Mark is behind all the action every time.”

“If someone who isn’t part of the day’s script shows up during a shoot, we usually end up doing an improvised short clip which Mark edits into a content extra.”

Like any production, End Game has its detractors who either think it pointless and sub-standard or consider it a rip-off, but Mr Wee and Mr Craddock have not let it deter them.

“It may not be the kind of art that one would typically expect, but a surprising amount of art and skill go into doing up the costumes, props and make-up,” Mr Craddock said.

Mr Wee also refuted the claims, pointing out that End Game was independent in every sense of the word despite borrowing inspiration for characters from previously mentioned mainstream productions.

“The film is intended to be as realistic as possible without superhero survivors that wouldn’t survive a real-life apocalypse, unlike Resident Evil, for example,” he said.

“And if you think no-one’s interested, trust me, there are heaps of zombie fans out there.”

Although a completion date has not been set for End Game, the team is positive about the direction in which it is heading.

If the recent Logan library’s Sci-Fi and Fantasy Finale Day where the cast swept all three awards in its costume competition is a shadow of things to come, then End Game is set to be very infectious indeed.