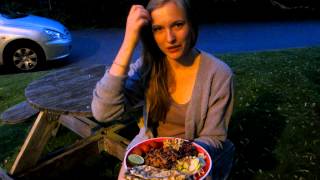 Two non-Muslims experience what fasting is like during Ramadan Imagine having to wake up to eat your breakfast at the break of dawn and not allowing food or drink to pass your lips again until after sunset. Now envision having to do this for 30 days. Sound unbearable? This is exactly what Muslims willingly do every year.

Daily fasting for a month is an imperative part of the holy Ramadan celebrations yet many people from non-Islamic faiths are astounded how Muslims are able to cope during this time. For Stuart Richards, an American-Christian, and Maja Schwoerer, an agnostic hailing from the United Kingdom, curiosity got the better of them this year and both volunteered to fast during this years Ramadan.

Stuart took part in “The Ramadan Challenge for Non-Muslims” which he heard about from a Muslim friend. The challenge was setup as part of an online forum with the aim of non-Muslims to share their fasting experiences with others, yet Stuart was the only blogger amongst many others on the site who agreed to take part. Maja, on the other hand, participated in the Coexistence Trust‘s “Can You Last a Muslim Fast?” as part of the Trust’s contribution to UK Ramadan Festival 2012. Stuart Richards and Maja Schwoerer volunteered to fast during Ramadan.

As a professional chef by trade and having attempted Seders and vegetarianism in the past, Stuart said he was interested in trying out what he thought was “honestly a pretty cool idea”. Suspecting that few, if anybody else was going to take part, he also felt that he was obliged to accept the challenge.

Maja, although an agnostic, also had a Christian upbringing and had experienced a year living with a Jewish host family in the United States. However, she had never previously tried to understand the Muslim religion.

“Can You Last A Muslim Fast was my opportunity to be a little less ignorant towards Ramadan and realise the amount of convictions and emotions that lie behind it,” Maja said. “I fasted for seven days. During each of those days I did not drink or eat for 18 hours (from dawn until sunset).”

However, fasting is not always easy as Stuart and Maja soon found.

“I couldn’t do a lot of heavy work during the day,” Stuart said. “I tried mowing the lawn once and just found it wasn’t possible. I needed a drink after labouring in the hot sun, and I got really hungry and couldn’t eat stuff for hours later.

“I knew more about Islam than your average person going in, so I knew that you’re allowed to eat at night, but I didn’t know the bit about nothing to drink. That was probably the worst thing. I generally have only one or two meals all day anyway, but I drink iced tea (unsweetened, I’m a Northerner) around the clock.

“In Christianity, fasting does not exclude water or sometimes other calorie-free beverages, and occasionally if you’re really infirm you can eat crackers or something.

“So not being able to drink anything at all was the hardest. It made it really hard going out anywhere too. I couldn’t go to a coffee shop  without buying something, so I’d have to go with friends and buy them stuff to sort of explain my being there.”

It was through giving that Stuart found a way to cope, like many Muslims who celebrate Ramadan in a non-Islamic community.

“I figure the whole point of it ultimately is to help out others, so that was my own little way of doing that,” he said. “I wasn’t too jealous or ravenous or anything usually, so I could deal with just watching them eat. Also I ended up going out at night more as a result.”

Maja said that the first two days were the hardest and put her resilience and willpower to the test.

“It seemed impossible,” she said. “After that, it was relatively easy; my body adjusted, and it was almost like being a camel. I did not miss water anymore, and the thought of eating during the day was plainly weird. After nine pm every night, I would eat and drink as much as possible, but ever so slowly. I realised quickly that I didn’t need to make up for the whole day.”

As difficult as it was not being able to drink his beloved iced tea, Stuart said that perhaps the hardest part was remembering to pray.

“I downloaded some kind of browser app to tell me but I couldn’t get it to work, so I just looked up the times for my area and I remembered about half the time at first and then sort of gave up as time went on. I didn’t have to pray to Allah or towards Mecca or anything. The terms of the challenge were that I pray to my own god in the manner I’m accustomed to, just at the times the Muslims do, but I ended up forgetting that most of the time.”

Maja said that trying to refrain from complaining was “immensely difficult”.

“I had put this on myself, so there was no one I could blame,” she said. “However, I constantly felt the urge to make everyone aware of my situation. You will most likely never encounter a Muslim who does that. It seems to come without saying that Ramadan is endured silently, but the joys of it are shared.”

Watch Maja’s video blog below on her second day of fasting.

Although Stuart said the lack of iced tea was “really hard”, he believes the restrictions on when eating is allowed during Ramadan isn’t “that bad” as opposed to Christianity fasting where food is forgone for the entire duration of a day.

Maja also said that in some ways, fasting for Ramadan was not as unbearable as she first believed it might be.

“I was quite convinced it might be impossible,” she said. “In this sense, I was surprised how doable it was, and furthermore, how well it could actually be integrated into your work routine.”

Ultimately, Ramadan is also a time where Muslims try to become more spiritually connected. Maja said that she considered her Ramadan experience as an almost spiritual one even though it was not her attempt at introspection towards a God she believed in.

“With that said, the fasting experience made me feel incredibly strong; I was getting up early, commuting for hours, and working hard, yet I had this unbelievable focus. I was not dependent on food to make me feel better; it was all in my head. I had the willpower to control myself entirely. This was something I never experienced before. I felt utterly connected to my whole body, every aching muscle, my dry throat, and sensed my emotions with a peculiar distance.”

While Stuart only fasted as an “interfaith exercise” and, like Maja, kept the religious aspect of the Islamic faith at a distance, he said that in a sense he did become more spiritually connected to his own faith and subsequently developed a greater understanding of Muslim beliefs.

“Going into this ‘other’ religion’s practices and beliefs and fasts have forced me to develop a stronger reconnection to my own,” he said.

“Our blessings in heaven in Christianity aren’t really defined but seem to be more centered around love than around material stuff. Christianity’s heaven is not going to resemble upper class America; Islam’s paradise is. At first blush Islam seems like the more attractive option, but I think Christianity’s notion of the afterlife is ultimately more profound and more spiritual.

“That said, the Qur’an, even in translation, is easily one of the most beautiful works of prose ever produced by humanity. I wish I spoke better Arabic so I could read the original.”

It could be stated that one of the most important things that comes from facing a challenge, or experiencing something new, is what you learn from it. Maja said that she used to think of herself to be “quite open-minded” towards other religions, but now realises how “ignorant” she was.

“Ramadan came and went for years without me noticing the community spirit that is behind it, the enourmous charity actions that come with it, and how it is truly the happiest month of the year for many Muslims,” Maja said. “Before this, I only thought of it to be some sort of awful, prescribed suffering.”

Maja also now has a new appreciation for her own body as she found how “miraculously” it can continue to function under extreme conditions.

For Stuart, it was rereading the Qur’an that opened his eyes to the Qur’anic approach to love.

“It’s put Islam into a new light for me,” he said. “I had read a long time ago that traditional Muslim countries like Saudi Arabia valued justice more than any other single attribute, the way that, say, America values freedom more than any other single attribute. But reading the Qu’ran again, now I understand why. It’s all about justice. Good people that do good things get rewards from Allah and bad people that do bad things get punished by Allah. It’s the cornerstone of how they view the world.

“Mercy and love are there, but it seems like they’re an afterthought to many. Although theology is, to an extent a social construct, I understand that there are some Sufi Muslims that place the same emphasis on love that Christianity does, and I’d like to learn more about them.”

Even though their Ramadan experiences were relatively short (about a week each), Stuart and Maja say that they now have more respect for Muslims who fast each year.

“On the one hand, most Muslims live in areas that are culturally structured around Ramadan so that celebrating it isn’t as big of a hardship,” Stuart said. “But for those Muslims who are living in the West it’s a bit harder. They still have to go to work and do all the things they do, but without food or water during the day. There’s apparently a Muslim pro football player, and I have no clue how he does Ramadan. But apparently he does.”

“I definitely have greater respect for Muslims fasting, and towards the Muslim community in London whose activities during the month left me in awe,” said Maja. “Complaining is a no-go, so you will never realise how much willpower your co-worker is actually using to keep up with his or her workload.

“In addition, Ramadan is no month for resting. The Muslims I have met felt almost guilty when taking a break during the day. One of the conceptions behind Ramadan is that this is the month to be as active as possible and to do the best you can for helping other people.”

So will Maja and Stuart ever fast for Ramadan again?

“I am actually very set on doing Ramadan again next year, maybe even more than a week,” Maja said. “It’s been a good experience and great way of reminding myself of how valuable food is.”

“Probably not every year,” Stuart said. “But if I ever found myself in a situation where it was convenient, I’d be open to it.”