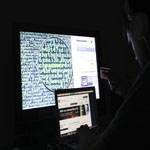 The Australian public are on the brink of losing their rights to online privacy if the proposed National Security Inquiry launched by the Australian government, becomes legislation. The Australian public are on the brink of losing their rights to online privacy if the proposed National Security Inquiry launched by the Australian government becomes legislation.

The laws would allow the Australian Security Intelligence Organisation to have access to all Australian Citizens’ Internet history, details and banking passwords.

Attorney General Nicola Roxon claims that these laws are necessary to tighten security against cyber crime and terrorist threats.

Steven Roddis, a member of the Electronic Frontiers Australia and the Pirate Party Australia, spoke out against the proposed laws.

“What we are giving up is a clear human violation of privacy,” said Mr Roddis.

Mr Roddis says that with major corporations including Visa, MasterCard, Vodafone being hacked in the past as well as ASIO’s website recently being hacked, this proposed security legislation could be putting us more at risk than protecting us.

“The to-be-stored data is often called a honey pot, a treasure trove, and those claims are not without merit. Those in organised crime or terrorism could use this data to aid in achieving their malicious objectives,” Mr Roddis said.

“Imagine knowing where all of a certain group will be by crunching telephone records, emails and social media, the uses are limited to the imagination. A criminal using this data to suit their own needs is something no one wants to see.”

Dr Nicholas Carah, an expert on social networks and a professor of communication at The University of Queensland, claims that he can understand why governments would want to access this information to protect us from online crime.

“There is a growing recognition from governments on law enforcement all over the world that organised crime is way ahead of them in terms of using the internet to do crimes; and one of the arguments that law enforcement is making, is that there aren’t the legal frameworks in place to enable us to collect the information we need to do the kinds of surveillance we need to do,” said Dr Carah.

However, he also see’s the potential risks if these laws are put in place.

“There is a problem there once you start granting governments and intelligence agencies increasing control over our information lives, then states aren’t always going to do good things with this information,” said Dr Carah.

In the digital age it will become increasingly difficult for online users to protect their private information, but the question remains if the proposed laws in the National Security Inquiry will truly protect us or simply put as more at risk.

Mr Roddis says that every Australian at some point has had their personal information transmitted over the Internet.

“The question isn’t if our information will be breached, but rather when the data is stolen or misused how will the supporters of the data retention scheme justify the price paid by the innocent?”

There is a fundamental law in security “If you don’t need the data, don’t collect it.”