Ice is one of the most severe, dangerous and addictive drugs today, which has users coming back again and again.

Ice is highly addictive and causes serious side effects

Brisbane’s drug scene has seen a recent increase in the use of illegal methamphetamines due to recreational users and substance abusers moving away from poor quality batches of MDMA (ecstasy).

Illegal methamphetamines, also commonly referred to as meth or ice, come in the form of a white crystal or soft powder consistency and with the array of euphoric and severe  side effects, is one of the most addictive and dangerous drugs available today.

According to Fairly Mcliwraith, senior researcher of illicit drugs at The University of Queensland, “people aren’t happy with the quality of ecstasy and therefore are turning to methamphetamines.”

Dr Mcliwraith also said that the other main factor contributing to the increased use of ice was financial.

“There’s more money perhaps in selling ice; drugs are just like anything else it comes down to commodity and people wanting to make a profit. And it’s my understanding that to make a good batch of ecstasy is a little bit more difficult than making a good batch of (ice),” she said.

The fact that this substance is most often snorted or injected intravenously (it can also be smoked or swallowed) is not the most shocking part of methamphetamine use.

Only the smallest amount of ice is needed to fuel a high of up to 12 hours, powering a confidence and energy in users unlike anything else. Don’t even think about eating or sleeping.  As the body quickly absorbs ice, chemicals in the brain, predominantly dopamine, are released in high levels and are refused re-uptake (necessary) resulting in a prolonged elevation and high.

After the high, users must weather a come down that is a three-day depression where irritability is in abundance and sleep is hard to come by. For dependent users, withdrawal symptoms kick in and last. This is where addiction lies; why be depressed when a small hit can make you feel normal again. 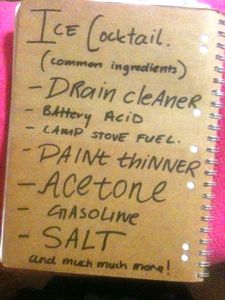 Director of emergency at the RBH, Brisbane, Professor Alan O’Connor, knows the effects of drug use first hand.

“On a weekend we would probably see two to three people affected by it [ice]. These are often in combination with other drugs or alcohol.

“The exact figures we don’t count because often when they’re affected by ice, they go and hurt themselves or they go do some damage in other ways and they come in for that reason. But on average we probably see about 10 cases a week,” said Prof O’Connor.

And due to the characteristics brought on by ice, methods are taken to ensure safety for the patient, nurses and doctors.

“They are often very agitated and aggressive when they arrive in the ambulance so we give them drugs such as Valium, which settles things down. They can sometimes be even unconscious,”  said Prof O’Connor.

At the most severe end of the spectrum is the risk of lapsing into psychosis.

According to Geoffrey Smith, clinical nurse consultant at the Cairns Base Hospital psychiatric ward, “lots of users of methamphetamines actually experience really mild symptoms of psychosis like hallucinations and paranoia. But it only lasts a few hours.”

Dependent users however are at a higher risk of developing psychological damage, which in severe cases psychosis can last for months.

“You lose any sense of reality and there’s no limit to what the voices in your head will tell you to do,”  said Mr Smith, of dependent ice users.

Additional risks associated with ice use are copious, and are not limited to harming yourself or others, jeopardising relationships or extracting HIV from sharing needles.