The struggle of the veil Shahad, a Muslim student, who chooses not to wear a hijab.

When you arrive to a new country your whole life changes and often people are left clinging to their home traditions for reassurance more than they usually would. Sometimes this can manifest itself in strange ways.

For instance, Muslim women, who have chosen to migrate to Australia, have reported feeling continuously harassed and judged for choosing not to wear the veils in Australia, more so than they would be back in their home countries. The hijab is a veil, which covers the hair and neck of Muslim women.

In Muslim culture and religion, the veil symbolises modesty, morality and privacy.

Three Muslim women recently shared their stories about living in Australia. They all come from different countries but share the same religion: Islam.

Shahad is a young Muslim woman who came to Australia to study political sciences at The University of Queensland.  She decided three years ago that she did not want to use the hijab anymore.

According to Shahad, women who decide to wear the veil do it in order to show that she has values and that she is a respectable person.  Of course, she believes that using a veil does not make you a ‘better’ person.

Her mother used to ask her to wear the hijab back home. Strangers would stare at her and judge her in the past if she was not wearing her veil.  Nonetheless, Shahad was able to convince her mother that the opinion of others did not matter.  This was tough, a few years ago. Now, she believes that women back home are  more open towards the idea of not wearing a hijab. To them, it seems like more acceptable of the idea.

However, in Australia the story is different.  She feels judged every time she goes to a meeting of the Emirati student society as she is the only one not wearing the hijab. Within a smaller Islamic environment in a foreign country, she feels like the odd one out.

This is also the case for Nurul Hilmiati. She just finished her PhD at The University of Queensland. She moved to Australia four years ago with her family. Her husband left his job as a journalist back home to come here and work as a cleaner in order to support his wife in her aim to pursue an academic career.

Nurul shared that she also feels judged in Australia for not wearing the veil within the Indonesian community. She said that it is a trend that seems to be much more noticeable here than back home. She also suggested that she mostly feels judged by women and not men.

The hijab is mentioned in the Qur’an. This represents a challenge for women like Shahad or Nurul who want to break this tradition.  They do not necessarily agree that wearing a veil will make them more respectable.  This challenge is at the heart of a very basic, private struggle that these women are facing every single day of their lives.  They are brave and somehow hold pioneering views in their respective communities.

A different case is the one of Nur Farhah, a student from Malaysia who chooses to wear the veil. She says that she has always worn the hijab. It shows to others that she is a respectable woman.  She says that she does not understand Muslim women who do not wear the veil and that she feels that they are not being truthful to their faith. She also believes that these women are being influenced by Western culture into behaving in a way that does not go along with their religion.  She says that people respect her more for following truthfully her religion unlike others that do not.  She feels that people in Australia sometimes stare at her for wearing the veil but it is something that she is used to by now.

Some researchers like German Munoz suggest that in the western media, Muslim culture is seen as more traditionalist, irrational and aggressive and therefore, more backwards. These women are seen as ‘oppressed’ by wearing the veil.

An example of how Western cultures have dealt with challenging cultural and religious issues is how the French government banned Muslim women from wearing the burqa in public places the 11 of April of 2011.

The burqa is an outer garment used by some Muslim women to cover their bodies and faces in public. The French government considered that the burqa prevented others to identify the person. Many Muslim women manifested in front of Notre Dame in Paris to defend their rights to wear the burqa. 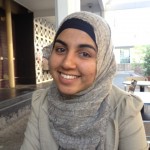 The struggle for these women to fit in within a different society and establish their own identities, without losing their values and traditions is admirable. However, it seems like human beings in general, no matter their culture or religion, are prone to judge in some way or another, either if they choose to wear the hijab or not. The secret they have taught us is we should defend our own values and  identity, respecting those of others in the process.

I believe this is a extraordinary lesson for women of all religions: Whatever you decide in life, perhaps it might be advisable to always be happy with the precious, dignified individual you are. You are who you are in any culture or society, as long as you are also respectful of others.