The reaction to young marriage has developed over the last few decades, from simple acceptance and normality to a raised eyebrow. One young couple believes any time is the right time. The thought of getting married just after your 21st birthday could easily make some people feel nauseous. Others might run off to consult their five-year-plan, only to realise they hadn’t considered it at all. However for 21-year-olds Kate Chambers and Tom Irwin, marriage is a part of their very near future. And although the young couple are set to marry in two months, they say they don’t believe in ‘true love’.

In a country where the average age for first marriage is now 29, Kate and Tom are quite a peculiar case. That isn’t to say that they should be locked up in a zoo before their ‘species’ becomes extinct, but there is certainly something to be said for successfully combining individual aspirations and lifelong love so early on in life.

In times of great technological advancement and the pursuit for individual success, it’s hard to stop and think that somebody could be riding the rollercoaster of life with you. Neither Kate nor Tom planned to marry young, but by luck or by fate they were brought together and both now know that they’re in it for good. “For us, the covenant of marriage is incredibly important,” says Kate, “and now that we both know who we want to be married to, there is no reason for us to delay it. If each of you is living to better the other person’s life, it’s quite a wonderful relationship to be part of, and I do believe you can be individually successful and married. It’s just that you didn’t get there by yourself – you had a wife or husband backing you every step of the way.”

The reaction to young marriage has developed over the last few decades, from simple acceptance and normality to a raised eyebrow. Perhaps people have come to consider the possibility of love as impossible? Or maybe most are just trying to get through the pressures of finding a sturdy, well-paying and mildly enjoyable job before worrying about love and commitment? “We do often have people asking why on earth we are getting married young and we do often field a few bizarre questions,” says Kate. “Perhaps choosing to get married early comes out of a desire to create a safe, committed relationship like our parents did in a world where relationships are becoming more volatile and conditional? I don’t know – Tom and I just feel very blessed to be exposed to loving marriages on all sides of our families.” 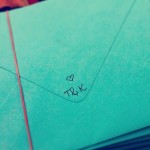 The invitation is in the mail

Ten couples among Tom and Kate’s close circle of friends have become engaged or married in the past year, all under the age of 28. Although this statistic is against the current trend of older marriage and would surprise a lot of people, Tom is hardly fazed by it. “I think some people don’t take you seriously or think that you don’t take marriage seriously,” says Tom. “Marriage is very important to me and whether 19, 29 or 39, if you understand what an important step marriage is then age shouldn’t necessarily be an issue. Culturally, in the last 30 years there has been a shift away from getting married young, and it is unsurprising that this is reverting; like all things marriage trends have peaks and troughs.”

Rachelle Brooks is a good friend of Tom and Kate’s and has noticed similarities between her married friends that prove they know what they are committing themselves to. “I don’t like when older people look down on younger people because they don’t have as much experience,” Rachelle says. “Although these people are marrying young, I know that all of them have gone through tough times together and been angry and fought with each other; I know they understand that marriage is making a decision to love their partners for the rest of their lives, “in sickness and in health and in good times and bad”.” She poses the question that maybe we’re all a little too scared to grow up and are waiting til we feel like proper adults to sort ourselves out. Rachelle also thinks that marriage is losing its value in society, which is resulting in the decrease in frequency of young marriage. Couples can live together now without making the full commitment like our grandparents’ generation. “I see a devaluing of marriage among today’s society,” Rachelle says, “that it isn’t important because you can still live together, have sex together and have children together out of wedlock, so why get married until later?” As a 20-year-old, Rachelle would like to marry young but says that just because it is her dream she “isn’t going to go out of her way to find someone to marry before she turns 25.”

Robyn Nicolle, an Australian Civil Marriage Celebrant, seconds the view that couples marrying from the early twenties age group are very aware of their age. “They know that they’re getting married young, but are very sure of their commitment to each other and a married life together,” she says. Kate and Tom are a perfect example of this as they know that regardless of age, after meeting each other, they would have married each other. “I don’t really believe in true love,” says Kate, “I believe in true commitment. You need to find someone who you can be truly committed to and you know will be truly committed to you back. Tom and I recognise that we may not ‘feel’ in love everyday of our lives, and are likely to drive each other insane at times, but our marriage will be based on commitment, respect, joy, encouragement, patience, kindness and self-sacrifice. To us that is ‘true’ love.”

Robyn also says that couples from the early twenties group seem more romantic than older couples, such as high school sweethearts. For Kate and Tom, their engagement was something not out of place in a Disney movie. On the day of the proposal, Tom left a trail of letters for Kate to read and follow to eight of their favourite places over the morning. Starting off at her house with a hand-written letter delivered by one of Tom’s closest mates, Kate was ecstatic at what the day was going to bring. Tom had also left a camera behind so that Kate could take snapshots of each place she visited along the way, as she went on her last adventure before she became a bride-to-be. When she arrived at each stop, one of Tom’s friends was there to give her another letter which told her which place to visit next. “The last stop was our favourite lookout,” says Kate, “Tom was there and had set up a picnic for the two of us with my favourites – wine, cheese and mangoes. Tom got down on one knee, said lovely things and asked me to marry him. And I said YES! He slipped on a stunning ring that he had secretly designed and made with my Uncle who is a jeweller.”

Kate’s face lights up when she tells this, making it sound like it all happened yesterday. With wedding plans now well underway, the couple are planning to celebrate their day with a mixture of wedding traditions and youthful quirks. Kate and Tom will each say “I do” at their ceremony under an old Fig tree on a Sunshine Coast property, with their reception being held at a Dairy Farm on the same property. As a bridesmaid for many of her close friends in the past year, Kate is planning on having a few of her closest girl friends by her side. Her passion for handmade crafts also means that there will be no shortage of button bouquets, bunting and crocheted flowers.

Kate and Tom are a perfect example of the success of young marriage and a case of the right person, right place and right time. “I don’t think it’s sad that many people take a long time to find true love,” says Kate, “as true love is a decision not a feeling. I’m quite happy for people to take a long time to find someone who they can commit to like that. It is a very serious decision. Tom and I were just lucky to have met early in life.”