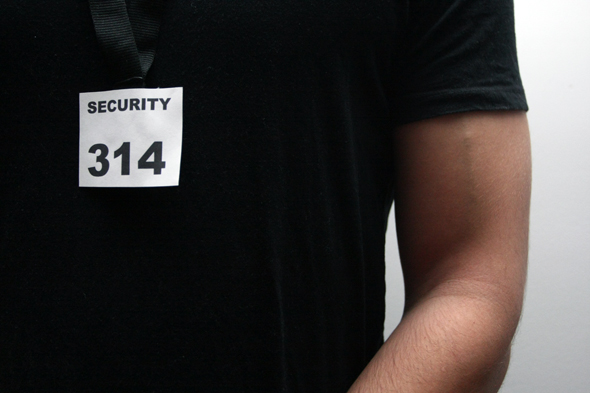 The door man: a familiar sight to Brisbane pub revelers

Bryan De Caires, chief executive of the Australian Security Industry Association,  revealed last month that almost half of the applications made by would-be security personnel in New South Wales used a “licensing loophole”, where accreditation under relaxed rules like those in Queensland was accepted elsewhere as part of the Mutual Recognition Act.

But some Brisbane hospitality staff have said that it is the security industry’s failure to appropriately discipline their bouncers that leads to recurring pub violence.

“I don’t think the problem is with who’s being employed, so much as what they’re allowed to get away with,” former Fortitude Valley bar manager, David Warner said.

“Instead of removing bouncers when they’ve done the wrong thing, security companies just move them on to the next venue. If you’ve had a bad experience with security at one pub, chances are you’ll see the same guys the next weekend at a venue down the road,” he said.

Emma Egerton, former door staffer of prominent Brisbane city bar Jade Buddha, believes that the potential for security situations to get out of hand stems from a lack of synergy between venues and security subcontractors.

“It seems that there is the potential with subcontracted security for bouncers to overstep the line, because they don’t really have anyone to answer to,” Ms Egerton said.

“That’s why [Jade Buddha] has always employed their own security guards rather than using subcontractors; the doormen feel responsible for whatever happens during the night, and if they overstep the line, then they face the very real possibility of losing their job.”

Legally, security personnel may only use reasonable force to evict a patron. In situations where greater than reasonable force is necessary, it is a legal requirement that police are called, and the patron will be issued with an on-the-spot, $550 fine.

However Townsville bouncer Karim De Ridder feels that while there are security guards that use unnecessary force in the line of duty, it’s unfair to tar the entire industry with the same brush.

“The problem is, for every 100 blokes doing their job legitimately, there’s going to be a couple who want the confrontation,” Mr De Ridder said.

Listen to the perspective of students below: