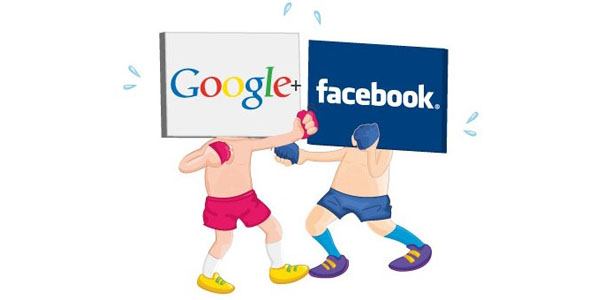 Who can slug it out the longest?

“Generally most of the users on social networking sites are not aware how much information they are sharing online,” says Goh Su Gim, a security adviser for a F-Secure, a corporation which deals with computer security.

Google+ have kept their privacy policy short with a little over 1000 words compared to Facebook which clocks in at close to 6000.  The main difference between the sites is how they allow users to interact with their privacy settings.

“Google+ main strengths are the use of circles where you place your friends in different circles based on their criteria of how much they want their post to go to which circle – therefore only selected Circles can view your post that you want to share with,” says Mr Su Gim.

“Facebook today has equal level of security setting with access-list that you can specify which friend belongs to – so it is very similar to Google+ as well in terms of privacy settings,” he says.

John Simpsons, a consumer advocate who works for Consumer Watchdog, an American nonpartisan organisation which supports consumer interests, says Google+’s privacy controls are easier to use and more intuitive than Facebook. “The idea of circles makes a lot of sense.”

Sayan Unankard, a PhD student at the University of Queensland who is undertaking research on social networks sites says “Facebook doesn’t make it as simple as Google+ to manage different groups of friends, associates and family”.

While the experts agree that Google+’s privacy settings are more user friendly they are not without their own flaws.

“One thing that needs to be remembered, though, is that once you share something with a limited circle – say friends – it doesn’t necessarily stay within the circle.  A member of the circle can share it with the world,” says Mr Simpsons

“The best policy is to assume that anything you share – no matter how purportedly the sharing is limited – can ultimately be seen by everyone.”